A few months ago, Tanner received an email letting him know that he’d won tickets to see U2 at Madison Square Garden. Obviously this was not a trip we’d planned to take this year, but wow, it turned out to be amazing. We spent three quick days in the Big Apple, but had an experience of a lifetime.

We started exploring as soon as we arrived, first trying to make sure we knew where we needed to be that night. I’ve been to New York a few times, but never the Garden.

After we found the venue, we decided to head uptown and wander around Times Square.

Later we picked up Tanner’s prize and waited in line to get into the concert.

General Admission tickets = on the floor with one person between us and the stage.

These guys are Tanner’s lifelong heroes and there they were, within a few feet of us at one of the most famous venues in the world. And man, do these guys know how to put on a show. They sounded fantastic. Wow, wow, WOW. A once in a lifetime experience.

Early the next morning, we headed downtown to the financial district and the World Trade Center site. The last time we were there, the memorial and its grounds were under construction.

We revisited Trinity Church and the Trinity Root. A goosebumps-inducing reminder of one of the miracles of 9/11.

And then we headed to the new tower.

We first visited the South Pool (there’s a memorial pool for both towers). This couple here choked me up a bit. The man was so gentle with the woman, helping her stand so she could look into the pool.

Click on the pano for a detailed view. There are no words.

Below is a photo of the tower with the Survivor Tree. This tree had endured the attacks of 9/11. It was discovered at Ground Zero during the aftermath. It was severely damaged, but it was removed from the rubble and taken elsewhere to receive love and care. It was rehabbed and recovered, then returned to Ground Zero. Now it prospers, serving as a reminder of resilience, survival and rebirth.

And this is the view of the tower at the North Pool. Suffice it to say, this is a very tall structure.

We then picked up some lunch at a local deli, sharing a table with an adorable older couple from Britain. Then we walked off our lunches by walking to the Brooklyn Bridge.

I’m such a sucker for graffiti. And cute pigs.

We crossed the Brooklyn Bridge, took a subway and walked through this great neighborhood to get to our next stop.

The Brooklyn Superhero Supply Company. The shop is part of a nonprofit organization that provides free after-school tutoring, help for kids learning the English language, and assistance with student publications. Proceeds from the shop helps fund the program. So not only did we have a blast, we helped a great cause.

We then hopped the subway again and headed uptown.

And by the way, Minions are EVERYWHERE. 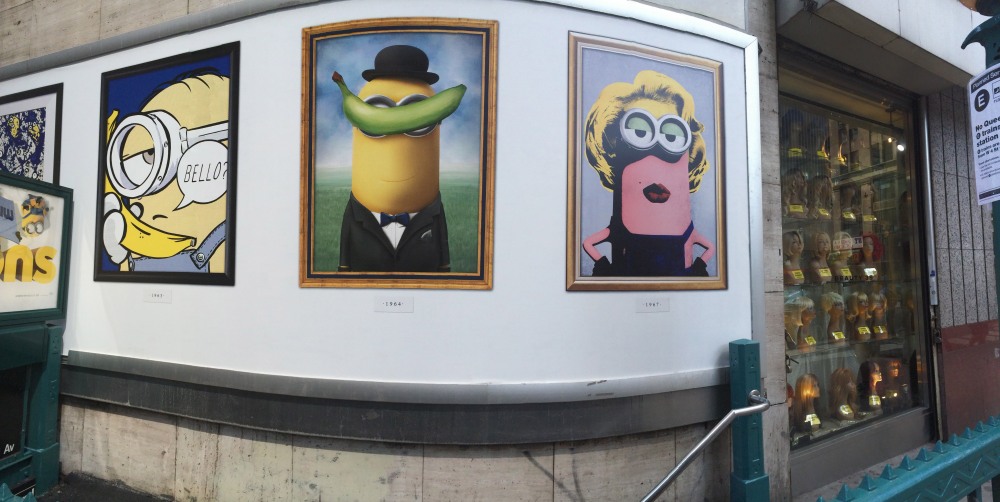 We headed back to Times Square and dinner at the Hard Rock Cafe. Click on pano for more detail.

Tanner and I had debated back and forth about what Broadway show we wanted to take in. After seeing many signs, we chose The Lion King.

And what a wise decision that turned out to be. I have no photos to show for it because no photography is allowed, save this ginormous lion head above the theater staircase. This show was magical. We could not stop WOWing the entire walk back to the hotel.

With a late flight home, we were able to see a few more things before heading to the airport. So we went to the Empire State Building first.

And in the Empire State Building gift shop? Breakfast at Kitty’s.

I nearly fell over. Obviously she came home with me.

The we hopped a subway and stopped at Central Park.

This little face smiled at me every time we left our hotel. It pretty much sums up our entire visit.

It was a fast, activity-packed, wonderful trip with too many memories to count. This is just a glimpse. Interestingly enough, I’d left my good camera at home and relied on my cell phone. But I really didn’t feel much like taking pictures like I normally do. I took quite a few, but not what I would typically bring home. I didn’t want to miss the experiences.

Now we’re home. And I am so, so grateful — for everything.