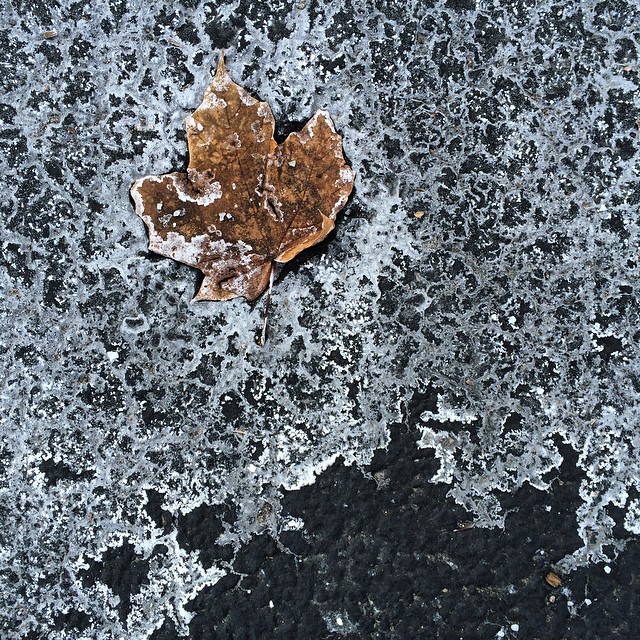 I have to be honest, as crazy as it will sound.

But I’m in love with this winter.

It’s been frigid. We haven’t had much snow. Everything is dry and barren. There’s not much light.

And I’m in love with it.

In my stubborn refusal to bring my running indoors to the treadmill, I’ve spent a lot of time outside this winter. A LOT of time. Because we haven’t had much snow, the sidewalks have been mostly clear of ice and other hazards. Most of my runs have been after dark, lit only by the glow of my flashlight. I don’t know if it’s the limited visibility or what, but all of my senses seem to be heightened. The cold air searing my lungs, the deafening silence of night, the steam from my breathing…I don’t know that I’ve ever been so aware or mindful in my life. And today, I had to bump my training run to early morning before work, which brought an added gift: frost. Dried leaves and dead grass along the sidewalk sparkled and glistened everywhere my flashlight touched. It was a wonderland. And even when I do have daylight during weekend runs, while I don’t have spring flowers or fall colors to admire, there’s still beauty to be found…even if it’s just an image left behind by ice-melt.

For all of my earlier pining for the long summer days and its lingering sunlight, I’m not in much of a hurry to get there any more. Sure, it’s painfully cold and the conditions can be awfully tough, but I’ve learned to love the season that I’m in right now.