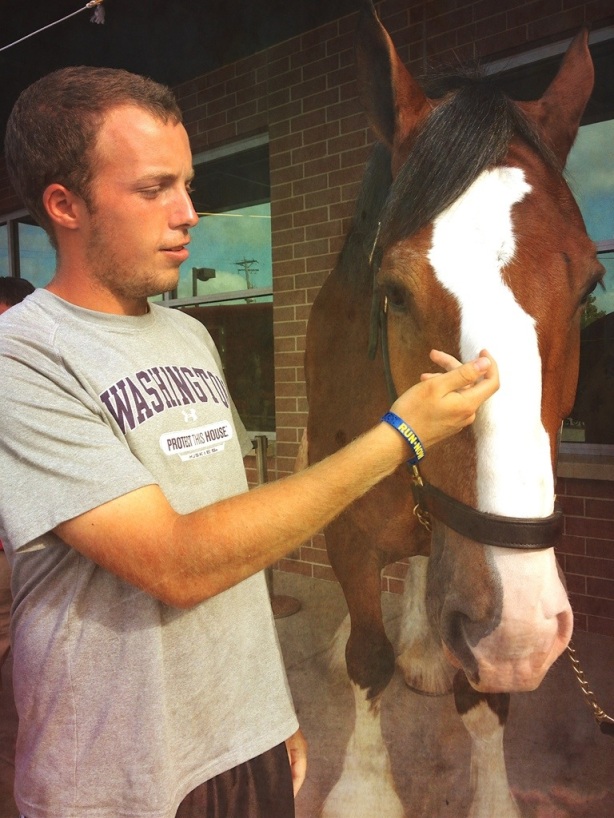 Yesterday afternoon brought a day off from training, so I tried to cram in as many chores into one evening as possible. Chores that I’ll admit that I’ve been neglecting quite a bit lately. Like going to the grocery store, for instance. We were out of everything, so I dragged Tanner to the store to help me expedite the trip. Get in, get out. That’s the mission. I have things to do!

As we trolled the overflowing parking lot for a spot, I started to grumble about a police officer blocking our way. “What the heck is he doing,” I started to say. But then Tanner pointed, “Look, mom. It’s Fredbird.”

Suddenly, I was an overgrown five-year old — and this trip to the store looked very different. Not only did we see Fredbird (shown below pretending to be arrested), we got to meet McGee, one of the Clydesdales from the pull team that you see on so many classic beer commercials. I have no idea how long we were out there, but my oh-so-crucial prioritized chore list was thrown out the window. We had fun. And I didn’t care about anything serious any more. 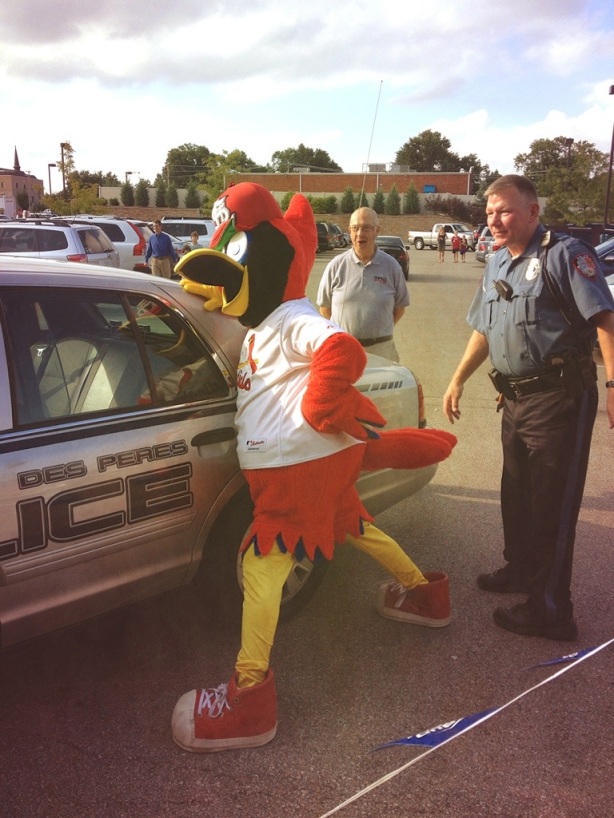 Then this morning, my training resumed and I decided to get a hill session in before I had to leave town for work. At 5:00 a.m., it was muggy, sticky and DARK. My mind couldn’t land on a particular thought at any given time during that absurdly early hour:  I’m tired. It’s early. It’s dark. I haven’t packed. That bush is creepy. It’s humid. This hurts.
But as I ran, I finally noticed the first light started to creep in. Then I looked up and saw the moon. I was reminded of the book “Good Night, Moon.” Hmmm, I thought. There’s no such thing as “Good Morning, Moon.” So I started rewriting the book in my head. Which ultimately made me laugh out loud as I ran. Before I knew it, it was time to head home.

I quickly got home and got ready to head out of town. I was a little late and my brain was in a scramble again by the time I got to the airport: I forgot tip money for the shuttle. Security checks are horrible. Please don’t let that screaming baby be on my flight.  I hate being away from home.
But then I sat next to this little boy. It was his very first flight and he was awed by everything. His entire face lit up as we took off and he pressed his face to the window in wonder. He was traveling with his grandma and he was going to get to stay in a hotel. His excitement grew when the attendant brought him a soda and peanut packets. I watched him and smiled. Leave it to a kid to remind me that everything we do should be an adventure.  And what a privilege it is that we experience so much.

It’s amazing to me that I’ve had to be reminded three separate times in less than 24 hours to slow down and view things through a different lens. But I’m very grateful.